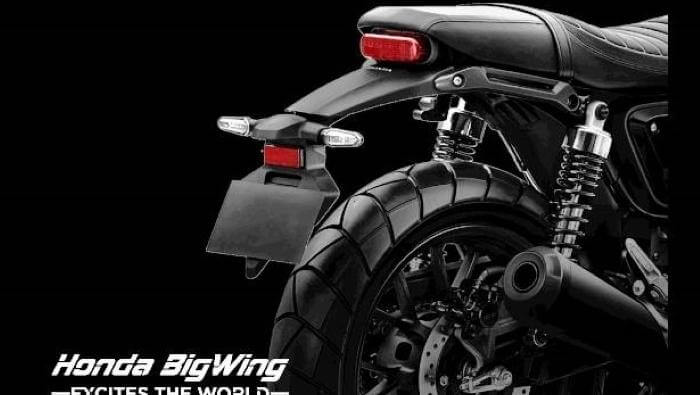 After breaking up from Hero in 2010, Honda started creating its own share in the Indian market. Now it has a 25% market share in just a decade. With the launch of CB 350, it has now issued a challenge at Royal Enfield and the middleweight bike category. CB 350 (H’ness) is getting rave reviews from everyone who has ridden it or even seen it for its refinement, quality and styling.

Honda now wants to cash on the success of CB 350 by launching another motorcycle with the same powerplant. Honda’s Indian arm has teased an upcoming motorcycle that is supposed to be launched on 16th February. There si nothing much known about the motorcycle apart from an image of the tail section. Let’s try to make out what we can from it.

The taillight seems to mimic that of the CB 650R in the way it’s designed. After just looking at the tail lights you’d think it’s a CB 350R however the seats are quick giveaways. The seats shown in the teaser squash all the hopes of it being a modern naked. The seat design and sculpture is a classic scrambler as seen on the likes of Ducati Scrambler, Triumph Scrambler and others.

Look at the picture below! There is also a very slight difference between the height of the rider seat and the pillion seat. The fact that the teased Honda bike also has twin shocks instead of just one like the CB 300R that it currently sells in the Indian market. Now that we have guessed the new Honda bike to be a scrambler, let’s look at the other specifications it might come with.

The new CB 350’s engine has gotten high praise from the Indian market for its smoothness and refinement. The company would certainly use this new engine in another chassis and I think the scrambler is a good fit for it. Just like Royal Enfield uses its 350 CC engine in the Meteor as well as the upcoming Classic 350 / Bullet 350, Honda would do the same.

The 348.36 CC engine produces 21.07 PS of power and 30 Nm of torque. This engine would be an even better fit for a modern motorcycle as it’s smooth and vibrations free. In a classic motorcycle, you need a bit of vibration and a feel for the engine, which some people miss in the CB 350 H’ness.

There won’t be much difference between the H’ness and the CB 350 Scrambler in terms of features that it comes with. We can expect a similar price tag of Rs 2.20 Lakh on road.