Manchester United is among the most successful football club in the world. They have the biggest trophy cabinets, the most number of fans and are among the wealthiest clubs in the world. Of course, a Manchester United fan would tell you these three facts the very first minute of your meeting. But it’s true. They, however, are just a shadow of their former shelf. A large chunk of their current problems can be attributed to their glorious past. The Man United’s fan base is so used to the high standards that every new player they sign is touted as the next Ronaldo or Scholes or Rooney. Fans are currently having a hard time adjusting to the new normal which is the fact that Manchester United are a Europa League team at the moment.

Paul Pogba the french footballer is the epitome of United’s issues. He first came to the limelight in 2010 on back of his good performances for the Manchester United youth team. This was a time when the senior team had legends like Paul Scholes, Rio Ferdinand, Wayne Rooney, Berbatov, Van Der Sar, Neville. The United’s team won the league and reached the Finals of the Champions League that year. For the coach of such a team to take notice, you must be really good. And good he was! Pogba was touted as the next great thing in world football. Soon however Sir Alex Ferguson had a fallout with the player’s agent and decided to let Pogba go. This is an old video that is resurfacing after Mino Riola’s comments on Pogba’s future at United.

Pogba was let go for a meagre amount to Juventus in 2012. By 2016 he had become a good brand and his valuation was inflated to $100 million. 2016 United were a mess compared to when Pogba left the club. This was a club that was now running solely on its legacy with nothing to do for on the football pitch. An incompetent vice chairman in Ed Woodward thought buying back a player for $120 million that they sold for free 4 years ago was a great idea, and so Pogba was repurchased

Fans were sent into a frenzy seeing Pogba signing for United. They thought certainly Manchester United would become the strongest team in Europe challenging the likes of Real, Barcelona and Bayern. They waited for Pogba to settle in and take United to where they rightfully belong. Four years have passed and they are still waiting for Pogba to become the player that United fans thought he would be. But alas, that Pogba is nowhere to be seen. Maybe that Pogba doesn’t exist at all and fans were fooled by good video editing on YouTube and a very good PR team behind the player.

YouTube footballer is a term that is used for players who look good only in highlights. The good plays of these players are slow-moed while the bad play is edited out. Neymar is touted as a great YouTuber player as he’s too flashy to the point winning games becomes secondary. In the case of Neymar however, at least he has something to show for in terms of goals and trophies. Pogba, however, is all farts and no s*it. He doesn’t score goals, loses balls very often, doesn’t track back and goes missing in the majority of games. He has scored 26 goals in 116 goals for United. For comparison, Bruno Fernandes has 15 goals in just 24 games.

Bruno Fernandes the Portuguese player joined United United this year and has quickly become what people thought Pogba to be. Before his arrival the PR team behind Pogba made it seem like his teammates were responsible for Pogba’s bad form. Everything except for Pogba himself was held accountable for him not performing on a higher level and he got away with it for 4 years until Bruno arrived. He showed that you could be a good player without needing help from others around you. He has come into the team and exposed Pogba’s lacklustre display which was sugar-coated by ex-players, his agent and his PR team for years before.

There is no question that Pogba is an overrated player. He has been massively overpaid by United and continues to take them for a joyride when he wishes. Manchester United fans would be happy to personally drop him at his next club. 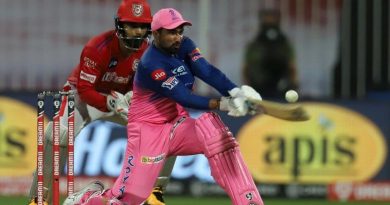 Tewatia’s Innings: He Had Us in the First Half Not Gonna Lie