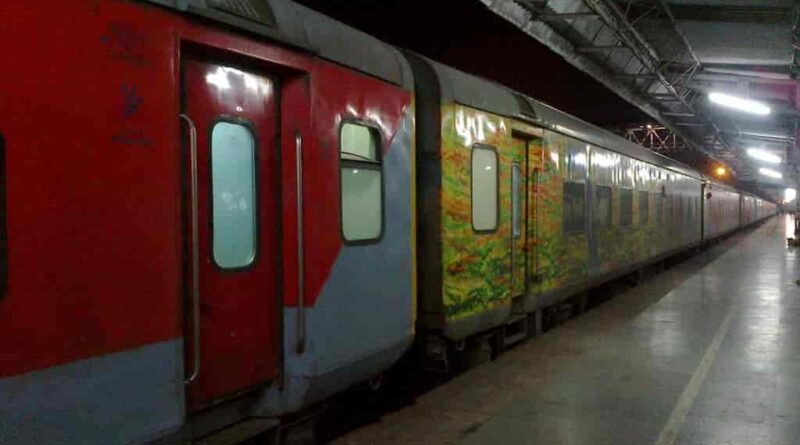 Indian trains are a thing of beauty. As a train lover, I cannot stress enough how beautiful liveries on train coaches and locos really are. These liveries add character to these trains and allow people to figure out what kind of Recently however I have come to notice that many trains are a mismatch of liveries from different trains. Why is that so? Before we look at the issue with mismatched livery, let’s answer a few questions about the colour on Indian trains.

What are liveries on the Indian train?

Liveries are the colour scheme used for coaches on the Indian train. In the beginning, they used to be black to not collect much black smoke from the engine and could be used for longer without cleaning. Later this colour scheme gave way to brick red and then to iconic blue in the 1990s.

Recently however the Indian Railways is experimenting with a lot of colour schemes for different classes of trains. These colours schemes not only allow for distinction between trains but also add character to the train.

Why are some Indian trains painted blue?

Why are some Indian trains painted green?

The green coloured livery is limited to only Gareeb Rath express. These are AC sleeper trains that have a side middle birth squeezed into their coaches and have three side berths are opposed to just two in other trains. This forceful addition of a third seat increased the number of berths per coach and hence Indian railways was able to lower the fare of seats in these trains.

This is why these trains are called Gareeb Rath (chariot of the poor). It was introduced by Lalu Prasad Yadav the Raily Minister from Bihar.

What are Indian trains painted yellow?

Liveries are also used to differentiate the different classes of Indian trains. Duronto trains for example have a characteristic yellow-green livery that is intended to be difficult to dirty. The Duronto train was first introduced in 2009 as a non-stop train between two stations. It is among the fastest trains in India with average speeds of more than 70kmph with Mumbai New Delhi Duronto being the fastest Duronto with an average speed of 82kmph.

All of these trains are restricted to a top speed of 130kmph due to track conditions and interchanges.

Recently Rajdhani trains are being upgraded with Tejas rakes with a Yellow colour scheme.

Why are Indian trains painted Red?

The inclusion of non AC sleeper coaches gives it away for the Express trains, otherwise, they look very identical.

Why are some Indian trains painted sky blue?

Sky blue is the livery of Shatabdi trains of Indian Railways. Shatabdi trains are fast AC trains with no sleeper coaches. They are fast and are intended for people travelling from major cities for business. These trains do not run overnight. These are also the fastest trains in India. Currently, the honour for the fastest train in India goes to Gatimaan Express which is a Shatabdi Express that runs between Hazarat Nizamuddin and Jhansi.

Why don’t Indian trains have a consistent livery?

Just a few years ago, Indian trains had very uniform liveries. Rajdhani had Red, Gareeb Rath had green, Shatabdi has sky blue, Duronto had yellow and other express trains had blue livery on them. However, once the Indian Railways began upgrading these trains from ICF coaches to LHB coaches the idea of a uniform livery went out for a toss.

For those who don’t know about ICF and LHB coaches, you should click on this link to know more about them.

In a simple sense, LHB coaches are better, faster and safer coaches than the older ICF coaches and the Indian Railways is working extensively to switch all of the Indian trains to the LHB coaches.

This BJP government also wants to plant their identity on the development of the Indian Railways which is why they have assigned new colour schemes for these trains. Now the livery for superfast express trains has gone from blue to Red which coincides with the Red livery of Rajadhani trains.

The Indian Railways is also upgrading the Rajdhani Express trains to Tejas Rakes which are yellow in colour. Since this is an ongoing process, some Rajdhani trains are red while some are yellow. Meanwhile, Duronto trains are still yellow.

So what happens if one of the coaches in either Tejas Rajdhani or Duronto breaks down? They are replaced with the normal Red LHB coach from any superfast express train. This is the root cause of all nonuniformity in the Indian railways’ trains.

Until all trains are converted into LHB coaches this problem with non-uniform train livery in Indian railways will persist. 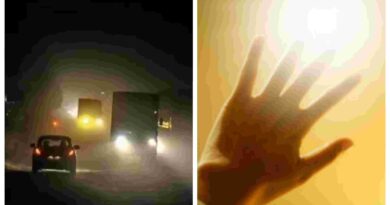 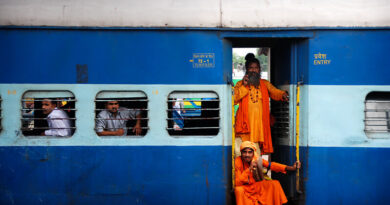 What Is Train Door Plating? Is It Going Away?